“Michael Prelee is a graduate of Youngstown State University. He resides in Northeast Ohio with his family where he enjoys writing. His crime fiction novel "Murder in the Heart of It All" is now available from North Star Press. The next installment in his Milky Way Repo scifi crime series, Bad Rock Beat Down, was recently released. The first book in the series, Milky Way Repo, is currently available from EDGE Science Fiction and Fantasy.”

Find more about Michael and his work at MichaelPrelee.com

Posted by LK Hunsaker at 1:29 PM No comments: 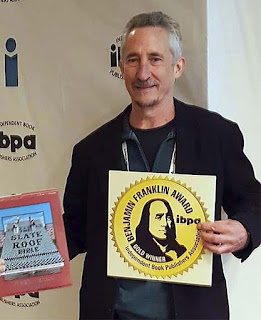 Joseph Jenkins lives near Grove City, Pennsylvania on a 143 acre homestead with an organic garden and orchard and a few ducks and chickens. He began self-publishing in 1994 while a graduate student at Slippery Rock University, with no professional writing or publishing experience, and has since sold over 85,000 self-published books with a combined cover price of over 2 million dollars. His three titles include: The Humanure Handbook (in 3 editions), The Slate Roof Bible (in 3 editions), and Balance Point (in 2 editions). His titles have been recognized in numerous local, national, and international book awards.

Jenkins also owns and operates a nationwide slate roof consulting business, and three internet sales outlets (SlateRoofWarehouse.com, SnowGuardWarehouse.com, and HumanureStore.com). He also provides international consulting services for "composting as a sanitation solution." His research, consulting, and speaking engagements have taken him to 58 countries and territories so far.

Jenkins publishes the Traditional Roofing Magazine and is the founder and executive director of the Slate Roofing Contractors Association of North America, Inc, a non-profit trade association. he is also setting up a slate roof training center in the Grove City area. 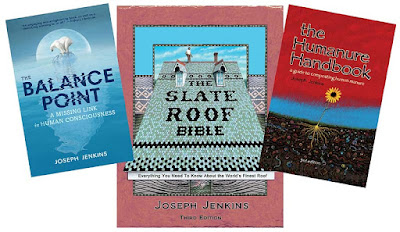